Some mistakes that beginners should avoid while practicing new tricks

Anyone will be a beginner before becoming a professional. It is the same situation in skateboarding. When being a beginner, all of us have the desire to achieve all the tricks in the shortest time.

But it is not an easy task, of course. For example, when I started my skateboarding, the first thing I wanted to do is an ollie and I tried my best for weeks doing this trick. Placing the wheels in the walkway to keep it stable, then putting force toward the tail in order to get off the surface.

It was easy to do that, but, doing this while rolling a skateboard was not the same, I failed many times. Then I realized that I got the common mistake of ignoring the basics, and I had to start learning it again and again. 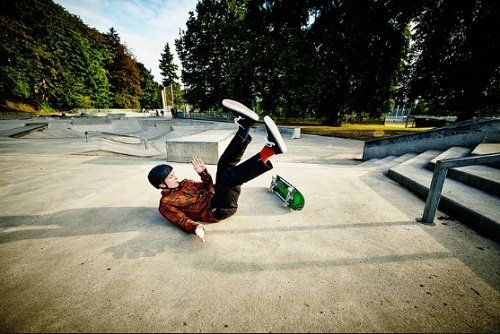 Like almost sport, skateboarding is a trial-and-error sport. You have to practice time over time a new trick until you master it. Failing and repeating are the keys to everything.

There are some common mistakes that many skateboarders make preventing them from getting better. If you know this, your skateboard level will be improved quickly. In case you are finding the best skateboard for beginners, we are here to help.

Ollie is considered as one of the most difficult skateboard tricks that any skater desires.

However, once you nailed it, it will become an advantage for your skateboarding future. Ollie improves your skill, then you are ready to move to other difficult tricks such as kickflips and grinds. Any trick has its own difficulties, but if you have basics, all will be possible.

In addition, to master the ollie, you need to learn the fundamentals of skateboarding, from how to step on it, balance, turn and stop. Skateboarding is like building a new house, you need to put initial bricks before put the roof over. Solid basics will lead you to a bright future. Maybe you think that they are easy skateboard tricks to learn, but they are important ones, too.

Ollie is one of the initial tricks that you can do after learning the basics. Flip is a trick that you can learn after mastering ollie. This shows you that any skateboarding trick is done based on the previous tricks, so it is essential for beginners to learn one by one.

Progression is the main key. If you have a desire for skateboarding, you must practice regularly to be better and better. There is a fact that once you stop skateboarding for a while, you may forget some tricks. Then, you take time to recall them again before doing perfectly as before. This is the reason why we spend time to make your skills to become a habit.

Putting too much effort

In fact, you can do a trick successfully without the fundamentals or previous tricks after doing continuously day by day. However, the result also contains plenty of injury in your body, especially your painful legs and feet.

Of course, skateboarders admire people who are trying their best to do a skateboard trick. No one advises you to give up since it is not a favorite choice. Sometimes, you just need to let your mind free and allow your body to have a day off after hard-working days of practicing skateboard.

You should know that if you are not healthy enough, it is impossible for you to do control yourself to do what you want. Finding good skateboard brands may help you sometimes.

There is a thing you can not ignore: skateboarding means injury. Once you start skateboarding, gradually you will accept the fact that you will come back home with bruises and wounds on your body. Bailing is the action of getting out of a trick during processing it.

It is quite dangerous if you don't have any idea about it and have no preparation for landing from the beginning. For many people, it is time-wasting to do this.

Bailing is not a good habit, but many skateboard beginners have it. This habit may lead to serious results in your body. To protect you from getting hurt, it is suggested to put maximum effort into doing tricks. Falling off the board is always safer than jumping.

If you are a skateboard beginner and you are searching for some mistakes beginners usually make, congratulation you are in the right place. Skateboarding is a sport mixing of both happiness and hurt. The more you know about the mistakes, the less injury you get and the shorter time you do a trick.

In case you see that our article is helpful and want to let your friends know, don't hesitate to share so they can avoid these mistakes as soon as possible. Don't forget to leave a comment so that we can know your idea as well as share your experience with us in the text box below! Finally, enjoy your ride and good luck!

how to fall on a skateboard

The things skateboarders need to prepare before going downhill