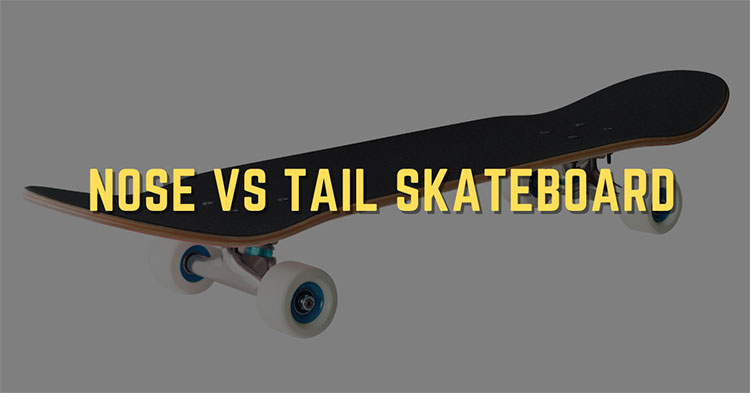 Nose vs Tail Skateboard – Ultimate Guide to Distinguish Them

Do you know the difference between the nose vs tail skateboard? Even though there’s nothing wrong with riding your board tail over the nose, doing this often will cause the deck to wear down a lot faster.

Without further ado, let’s get started on today’s article to distinguish the two skateboard parts.

What is the nose and tail of a skateboard? You need to figure out the definition of these two skateboard parts before being able to distinguish them. So, the nose is the front kicktail of your deck, and the tail is the back kicktail.

On a general scale, there are two types of skateboard shapes: popsicle and old skool.

For popsicle skateboards (or trick skateboards), it’s hard to distinguish between the nose and the tail because the skateboard itself looks like a popsicle with almost identical looking ends, as its name suggests. 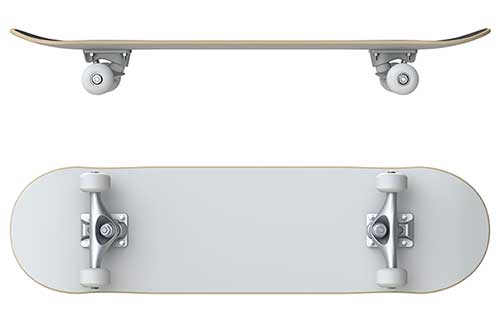 Nonetheless, when you inspect the side of the skateboard and stand on it several times, you’ll notice that slight difference.

As for old skool skateboards, the difference is easier to spot. The nose looks round and flat, whereas the tail is curved upward.

Difference Between The Nose And Tail Of A Skateboard

There are several ways to help you differentiate between the tail and the nose.

The first way to tell the difference between the tail and the nose is to look at their shapes. From the examples above, this should be easy for you. 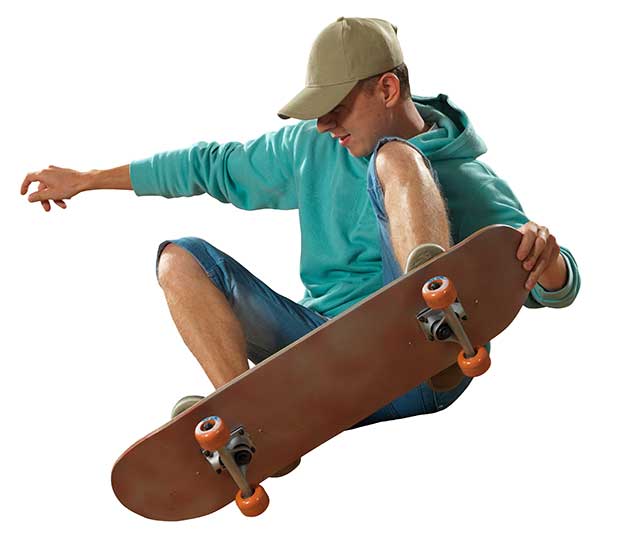 Look At The Shape

Several kinds of skateboards come with a smaller end, which is the tail. The other side is slightly longer, which is the nose. On certain boards, the nose is also broader.

The thing is, some companies even make the front more symmetrical rather than tapered from nose to tail, so they aren’t necessarily always wider.

Such a board aids in carrying out an ollie - the important technique to develop more complex tricks.

You’ll also notice that the nose is bigger for your foot to land on, whereas the tail is smaller and close to hitting the ground. This is why the nose is also called ‘catch’ because it catches your foot when you perform an ollie.

However, this isn’t always the case.

For some decks, it is the complete opposite. The tail is designed to be steeper, longer, and also wider. The nose is sharper and smaller. With this design, you can perform significant veteran moves.

Some brands design the two sides of the skateboard to have slightly different colors. For example, the nose has a brighter tint than the tail, helping skaters to recognize the skateboard parts with ease. 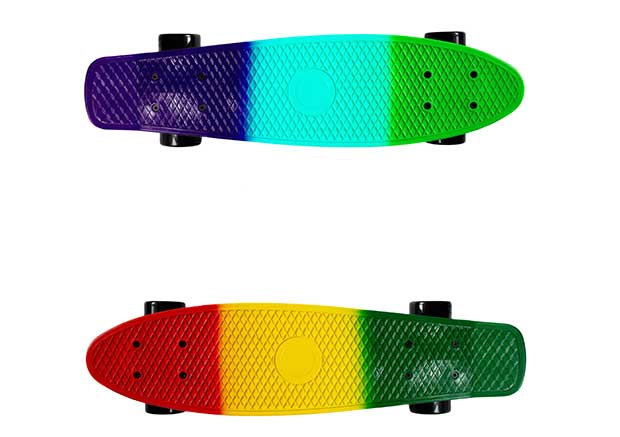 If your skateboard comes with a brand name, the fastest way to know the nose or tail is to look at how the manufacturer’s name is written. 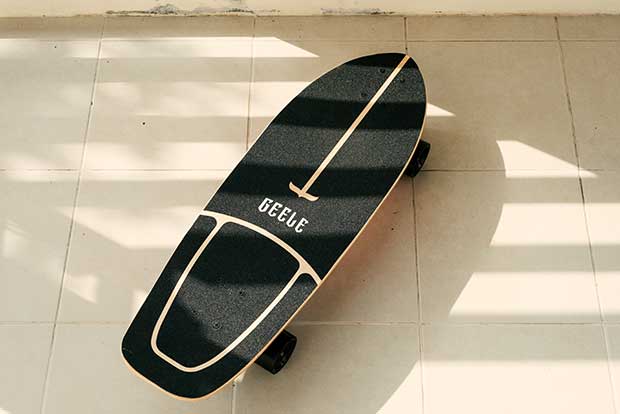 Look At The Brand Name

Some skateboards come with customized protectors to keep the border of the nose and tail from heavy impact.

The front part has a plastic nose guard, whereas the tail has a cover also made of plastic. Nonetheless, this feature usually comes in more expensive designs, so you can check out the methods mentioned above to know the difference.

Also, it is worth mentioning that not all skateboards come with distinct features like the ones we referred to. Some have almost identical noses and tails so that you can skate with either side without any problem. 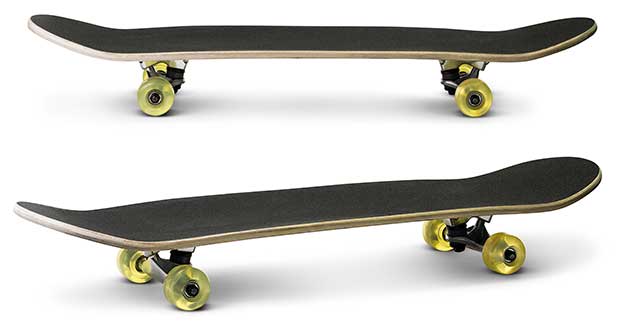 Skateboards with identical nose and tail

A tip to tell the difference instantly is to mark the ends once you’ve figured out which side is the nose and which side is the tail. After all, a skateboard wouldn’t be complete without some colored bolts or some cuts on the grip.

If you don’t want to do too much harm to the deck, one bolt is enough. Or you can get your imagination to work and play with the colors. Stencils and spray paint are the two things you can use to create your own customized skateboard.

Essentially, you wouldn’t want to get too technical as some decks have slightly different features that impact the overall feel when you ride a board.

Which End Do You Skate?

The answer to this question comes down to a matter of preference. Regardless of the end you skate, you’re likely to achieve the same result. Rumor has it that skateboarding backward makes it harder to do an ollie, but it’s purely a myth. 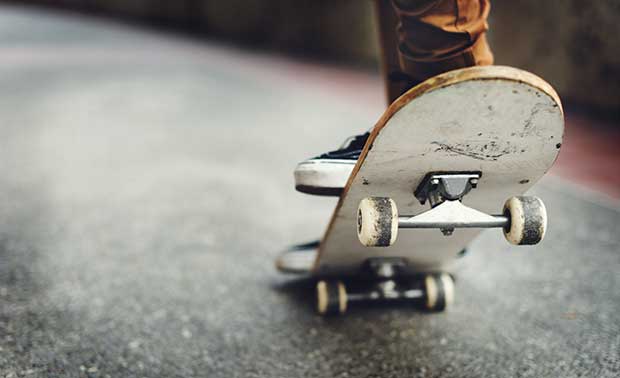 Which End Do You Skate?

Some people prefer skateboarding one side over another because it’s easier for them to make certain moves. This may apply to them, but not to you. If you keep using the skateboard with one end only, it’s going to wear down fast when you perform trucks, deck, and brushings.

Even though it might feel more comfortable to skate and carry out different moves on the same part over and over again, you shouldn’t do that.

It is recommended that you switch between both ends to see which one brings a better feel under your feet. Also, try getting used to skateboarding on both ends, so they wear down evenly.

See also: How Long Does It Take To Get Good At Skateboarding

And that’s a wrap for today’s article!

Knowing the difference between the nose vs tail skateboard is important for learning new tricks, especially if you attempt to perform an ollie.

A tip to distinguish the two ends is to ask the seller when you buy the board at a shop, and you’ll get the answer quickly and precisely. If you have any questions about this article, feel free to comment down below.

Thank you for reading!