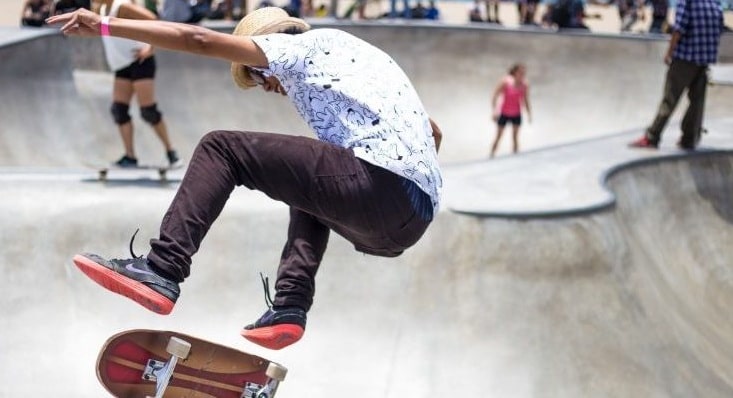 Learning how to skateboard is not an easy game, but things would get much better with the help of some easy skateboard tricks for beginners. Before moving to advanced techniques, you need to master all the basics first.

They are the foundation and leverage for you to be motivated, improve, and learn new tricks. Stay tuned for this article to learn more about those easy skate tricks for beginners.

Of course, when you first start skateboarding, all you need to learn is how to get on and off the board, perfect your stance, and keep balance while rolling. Whenever you are confident with the basic skateboard tricks, let’s move to carve and hold the speed. It is also time to learn these 10 tricks for new skateboarders.

An ollie is considered one of the most fundamental and easy tricks to learn on a skateboard. It is so basic that you can do it with any skateboard for tricks anywhere, either on the street or in the playground. 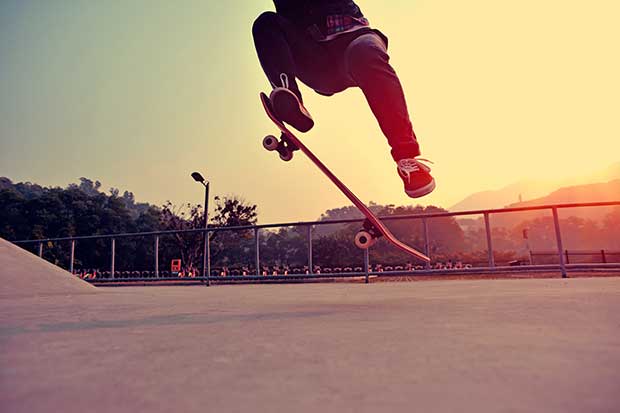 The key to this trick is keeping the skateboard stay with your feet while you jump. Try crouching at your knees and snapping the board tail, then use your front foot to lift the board.

A nollie is quite similar to the standard ollie; however, the former requires popping the board nose instead of the tail as the latter. They both use a similar principle; thus, it is much easier for you to learn the nollie once you have mastered the regular ollie. 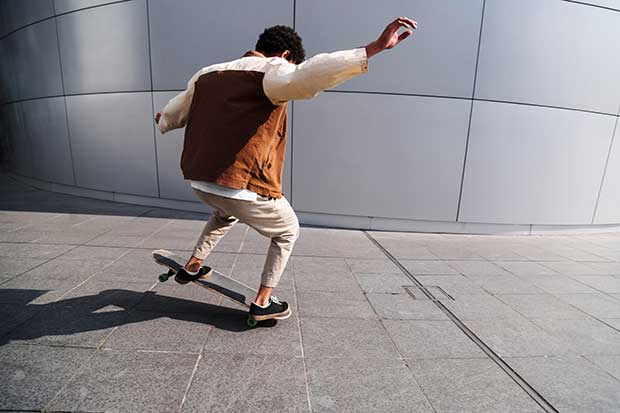 To practice a nollie, place your feet on the nose and the middle of the board. Lower your knees, and jump up, then snap your board nose off the ground.

Doing a nollie may be tricky for you since it involves popping the board with the non-dominant foot. Thus, it is normal if you cannot get as high with the nollie as the ollie.

Like a nollie, a pop shuvit is also a variation of an ollie, combined with horizontally flipping your board in 180 degrees. In this case, the board nose turns a half circle and becomes the tail. 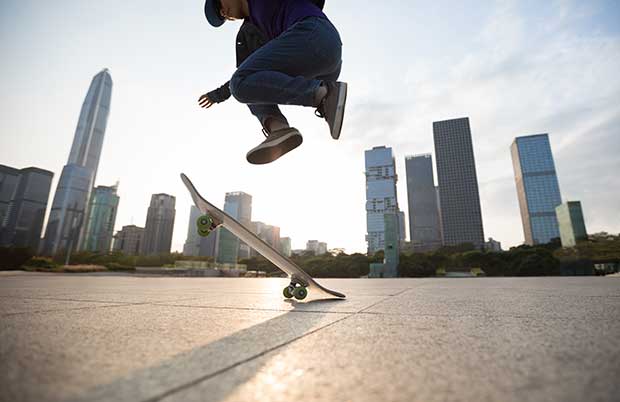 To do this, your back foot is in a different position from the ollie. Your toes would be in the pocket of your board tail, meaning they will almost be on edge.

It would be easier for you to make a backward scoop in this pose and rotate the board 180 degrees. Meanwhile, your front foot remains unchanged as an ollie. Just lift it off your board while you jump.

You can also try doing a front-side pop shuvit, which allows it to turn in the other direction when scooping your back foot forward. Here, let your back foot do the job, or else your board would easily flip over.

If you are confident with an ollie and a pop shuvit, let’s level it up to a basic front-side 180! It is mixed between an ollie and a 180-degree turn. 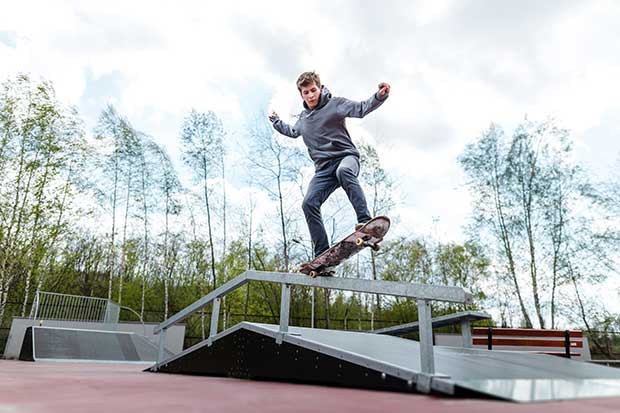 Frontside is the direction of the rotation, while 180 describes the degrees you might turn. Frontside means counter-clockwise for regular players and clockwise for Goofy ones. In this trick, the board would move along your body, or specifically, your shoulders.

Start with the same position as you do in an ollie, and you will get the movement to make a 180 turn from your shoulders. Crouch down as you are to jump, then turn your shoulders and your body backwards.

Your shoulders play an important role in getting a good spin, as they determine the spin direction - frontside. Do not hesitate to turn them back as soon as you take off in the air.

This trick is almost similar to the previous front-side 180, apart from the direction you spin. While the front-side 180 requires you to spin backwards, you need to spin forwards in this backside 180 trick. Luckily, the backside 180 is among the easiest skateboard tricks for beginners. 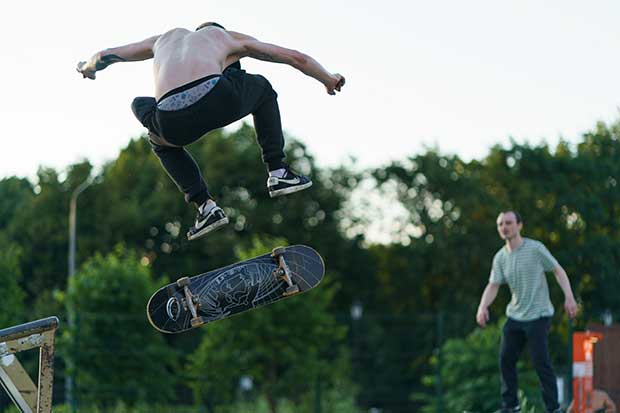 Pop your board tail off the ground and turn your shoulders towards your chest as you prepare to jump.

If you level high enough, this trick might not be too difficult for you. Just pay attention to timing, which decides the success of this trick.

With these frontside 180 and backside 180 tricks, you might land back either switch or fakie. The switch means moving forwards with your non-dominant foot while the fakie is backward rolling.

A kickflip is a cool and popular trick that allows the skateboarder to fully rotate the board 360 degrees on its longitudinal axis in the air. The involved movements might vary, depending on the practitioners; however, the basic ones are the same.

It first appeared in the 70s before being altered, popularized by Rodney Mullen and has become “the popular among the popular” since then.

A kickflip is quite similar to an ollie as you also kick your board heel edge as you jump to let it flip mid-air before hitting the ground. And as soon as you notice the griptape, put your feet stable again on board. It is the “catch.”

If you already learned how to regularly brake and kickturn, it is time to do a powerslide. It is a fantastic and quick trick to stop your skateboard. 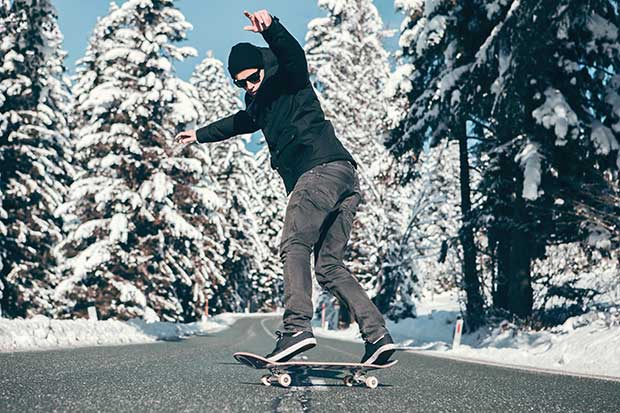 Theoretically, a powerslide requires you to turn the moving board sideways, letting the wheels skid and stop. The key here is you must accumulate speed in advance, and more importantly, you are comfortable riding around with your board first.

The secret of the trick is the shoulder throw and positioning your weight. Just stay as you wish as long as you are comfortable, then turn your knees over, use that to scoop, and throw your shoulders with it. Powerslide is a commitment trick, meaning if you do not commit the way you slide, it will not slide.

Like the kickflip, the heelflip has gained its position in the community over a long time. The only difference between a kickflip and a heelflip lies in the rotation direction. To be specific, when doing a kickflip, the board spins towards the practitioners while it spins in the opposite direction in a heelflip. 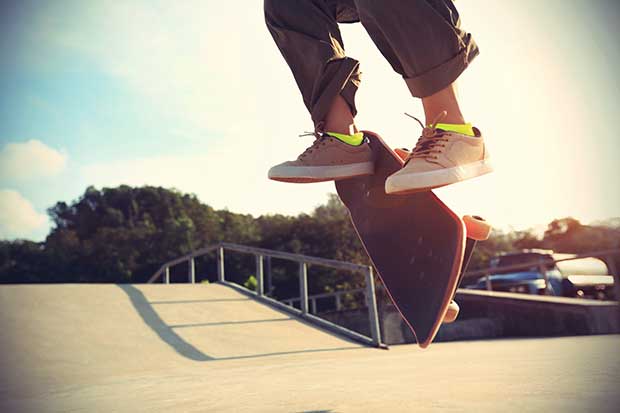 To perform a heelflip, you need to use your back foot to spin the board towards the toeside edge, instead of flipping it heelside with your front foot as in a kickflip.

Place your body in an ollie and use your back foot to flip the board in the air. When you jump, diagonally slide your foot towards the board toeside and flick the board with your heel.

Then, jump back a bit and give time for your board to flip. After it flips completely, it makes the “catch” and slightly bends your knees as you land.

Once you can do the basic heelflip successfully, you can also try doing other combinations such as double and triple heelflips, meaning your board will flip multiple times in the air before you catch it.

Though not many skateboarders have heard of a Casper flip, it is a cool trick to try. With this trick, you need to focus on your speed and the position of your feet.

A manual, or wheelie, is a trick that allows you to roll the board with two back wheels while lifting two front ones off. Balance is the key to this trick, so take it slow to place your feet in the right position.

Your back foot should be on the board tail while your front foot is behind the trucks. Gradually lean backwards to lift the two front wheels off and keep the position.

Never lean too much, or else the tail would drag on the ground and damage your board. Despite that, it is a common mistake that almost every new skater makes.

In this case, it is dangerous as you are likely to fall back on the ground and knock your head. Thus, remember to wear a helmet, even when you have already mastered this trick.

What To Consider When Learning Skateboard Tricks

Though skateboarding is safer than other sports, it is not completely safe. Fortunately, there are a few things you can do to avoid unwanted risks.

Skateboarding is fun, but it is also dangerous at the same time. No matter how experienced you are, wearing protective gear, such as a helmet, elbow pads, or knee pads, is a must. It is especially crucial to a beginner, as you tend to fall multiple times. 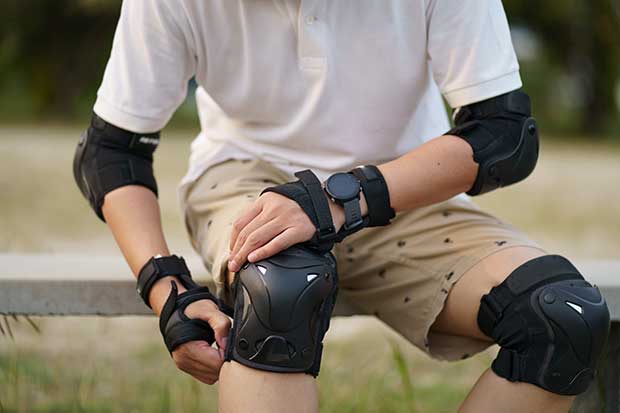 If a helmet protects your head from serious injuries, then knee pads, elbow pads, and wrist guards protect your arms and legs. Even a proper pair of shoes can minimize your possibility of falls.

Besides, getting the best skate for beginners and suitable skateboarding shoes is also important. Flip-flops and combat boots are not born for skateboarding.

Instead, you should purchase skate shoes from popular brands such as Vans, Etnies, Adidas, Nike SB, or DC’s because they guarantee full support for your feet and your body. If not, you should wear a pair with good soles and flat bottoms to grip the skateboard while practicing

Not every place is suitable for skating as it may hurt you and others. The best location to practice skateboarding is any skate park near your place. If there is none, find another flat surrounding as an alternative to avoid cracks and bumps that injure you and ruin your board. 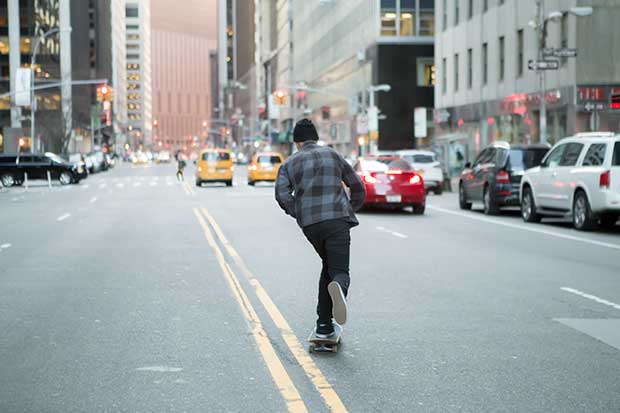 In some countries, the local authorities even have regulations on places allowed or prohibited to skate. Therefore, ensure you have researched and followed the rules. Otherwise, you might be fined or subject to other kinds of punishment.

If you have no idea where to skate, search for some on social media or refer to other skaters. Some applications such as Skate Sports or Shreddit are good to try since they offer you great skateboarding lessons and information on skateboarding places near you.

Staying away from crowded areas is the number 1 rule to learn skateboarding. But you should never skate alone either. At least you need to know there is someone to help you in case of any unwanted accident.

Moreover, it is much easier to practice skating with others. In particular, if they are experienced in skateboarding, they can watch you practice and help you advance your tricks. 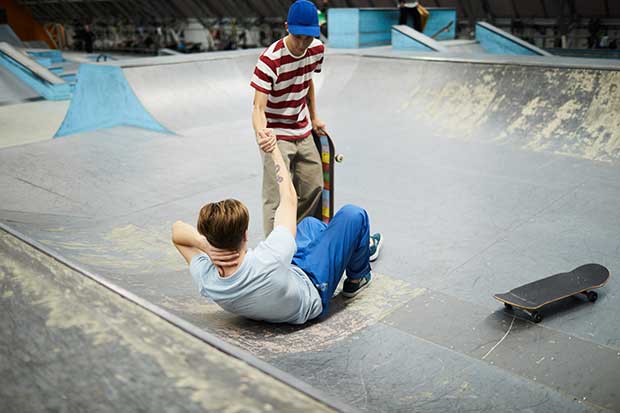 They also prevent you from making common mistakes or acquiring bad habits that are unfixable afterwards. Nothing is better than a thoughtful piece of advice from great pioneers.

However, it is essential to find the right guy to teach you. Learning how to skateboard with someone higher than your pace will make you feel pressured to catch up. Meanwhile, you also do not want to put them in bad moods by interrupting their tricks and asking for help.

Skateboarding is a fun outdoor activity for everyone, regardless of age or gender. In particular, it is easy to start and will not take long for you to ride confidently, turn, and stop your board just after a few weeks of practicing.

Watching the pro skateboarders on TV or social media performing advanced techniques would impress and appeal to you. However, they might be too complicated for you. Then, it is time you practice these easy skateboard tricks for beginners that we have discussed above.

Hopefully, with our instructions, you can now advance your skills and show your confidence in doing skateboarding in public.